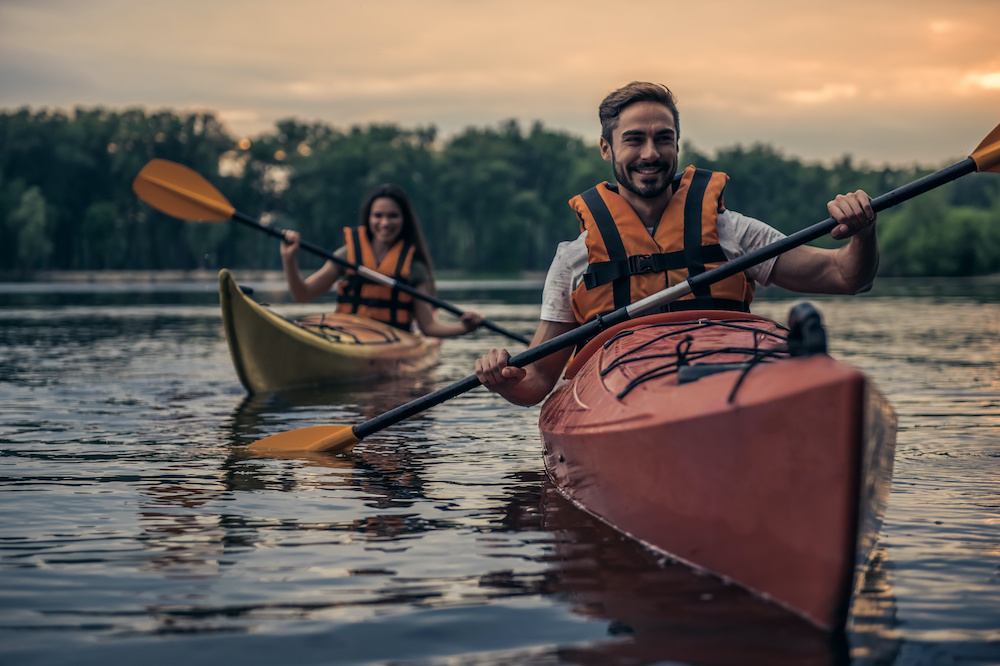 Sit in vs Sit on Kayak: Which Is Better?

If you have decided to invest in a kayak, one of the first questions you’ll face is whether to buy a sit in or sit on kayak.

After all, the last thing you want is for your new kayak to be relegated to the back of the garage.

We know that is where it will end up if it doesn’t meet your needs.

In this sit in vs sit on kayak debate, we’ll present the main differences between both kayaks, as well as the pros and cons of using them.

By the time you’ve finished reading, hopefully, you’ll know exactly which one is right for you.

How Do You Determine What Size Kayak You Need?

The easiest way to decide what size and shape kayak you need is by identifying what you will be using it for.

The longer and narrower your kayak is, the faster and straighter you will go.

So, if you need a kayak for longer distances or speed, you’ll want to look out for slimmer, longer models.

If you just plan on paddling around, fishing, or are a beginner, you’ll probably be better off with something slower and help you stay afloat.

This means opting for a slightly wider, shorter kayak.

Sit in vs Sit on Kayak

When deciding whether you should invest in a sit on vs sit in kayak, there are a couple of factors you must take into account.

Although they both fundamentally do the same job, most people find that one or the other is much better suited to their needs.

We’ve started by explaining the significant advantages and drawbacks of a sit on top vs sit in kayak.

We then listed their major differences for quick reference.

Sit-in kayaks are called such because they have room for your legs (inside the kayak underneath the cockpit).

Depending on the hull's design, you can usually brace your legs inside the cockpit to help you paddle more powerfully and efficiently.

Because you are sitting inside the kayak, your center of gravity is lower than it would be in a sit-on kayak.

This gives you better secondary stability, which is better when you are leaning to one side.

This secondary stability allows for more efficient turning and is very useful for paddling in a rough ocean.

The lower center of gravity also means that the kayak can remain more stable, even with a slimmer design.

A slimmer design means that sit-in kayaks can also be faster, making them better suited to longer-range adventures and expeditions.

Sit-in kayaks can also usually be fitted with a skirt. This encloses the cockpit area and helps to protect you from getting wet and cold.

The skirt is worn around your waist, and once you are in the kayak, the material can be arranged around the cockpit rim.

When the sit-in area is closed like this, it stops you from getting splashed so much by chilly water.

Obviously, this is essential when you are out kayaking in colder water or not-so-calm weather.

The lower profile of the kayak will also mean that you’re less affected by the wind.

Drawbacks of a Sit-in Kayak

Getting into a sit-in kayak is slightly more complicated than climbing atop a sit-on kayak.

The main reason people are afraid of sit-in kayaks is the feeling of being enclosed, especially if the kayak were to tip over.

Fortunately, it is actually very difficult to flip a kayak because they are designed to be stable.

If the kayak did capsize, you will actually pop out of the hull really easily and float to the surface quickly in your life vest.

Getting back into the kayak is also more difficult.

In fact, you will probably have to swim to shore before being able to re-enter.

If you were able to turn the kayak back over while you are in the water, you would also need the help of a bilge pump to remove the water from the cockpit. 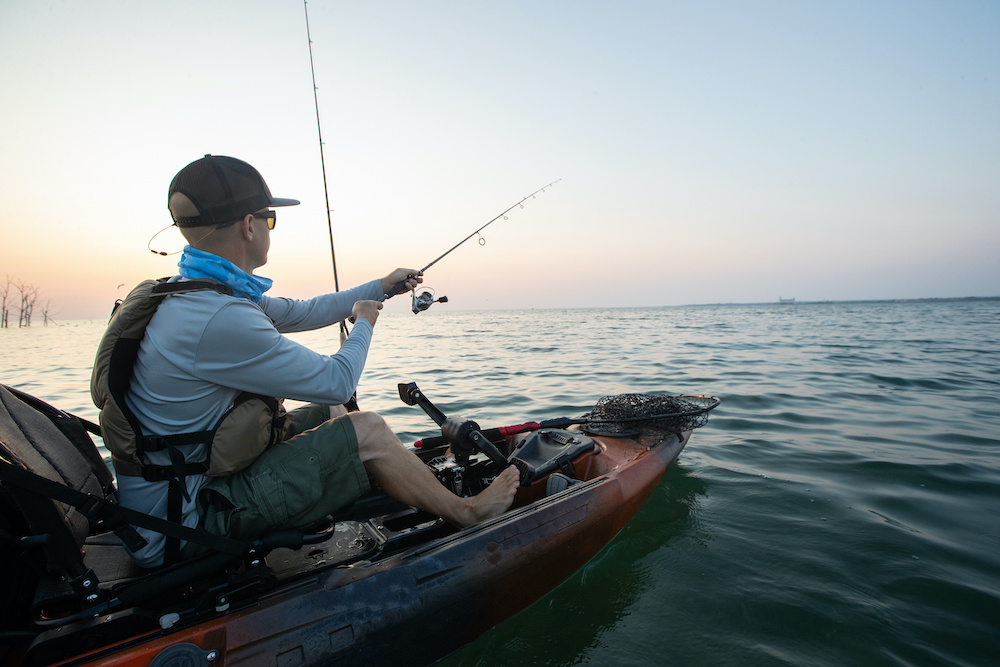 Sit-on kayaks are totally open. This means there is no space “ïnside” for any part of your body to go.

It is exactly how it sounds, too, as you sit on top of it instead of inside.

A sit-on kayak allows you to slide it off into the water for a quick swim or whenever the fancy takes you.

If you are kayaking in warmer waters or during a particularly hot day, this is a major selling feature of this type of kayak.

Although it is likely to be far from graceful, you can get back on the kayak afterward by hauling yourself up again.

Plus, if you do capsize, it will be much easier to get back on a sit-on rather than a sit-in kayak.

Sit-on kayaks also have self-draining scupper holes that allow the water to drain from the cockpit, meaning you don’t need a pump.

Drawbacks of a Sit-on Kayak

The major downside to a sit-on kayak is that you will almost certainly get wet while paddling.

It is virtually impossible to stay dry when paddling this type of kayak.

In fact, every wave or splash of the oar will get you progressively more damp.

This is why a sit on top vs sit in kayak is much more suitable in warm, tropical regions and isn’t really a viable option for cold-water anglers.

Sit-on kayaks are also usually wider and a lot slower than sit-in kayaks, which means they require more effort from you to propel them forward.

This makes them better suited to shorter adventures and for fishing.

Which Kayak Is Most Stable?

There are three things that affect a kayak's stability: the width, weight distribution, and the shape of the hull.

People tend to think that a wider kayak will generally be more stable than a slimmer design, but that’s not necessarily true.

The weight distribution and the water that’s displaced by the kayak is also just as important, as is the shape of your kayak.

Kayaks that feature pontoon hulls, for example, are generally far more stable than others.

The problem is that they are slower and not as maneuverable.

Is a Sit in Kayak More Stable Than a Sit on Kayak?

When it comes to a sit on vs sit in kayak’s stability, there isn’t really one clear answer.

A sit-on kayak has better initial stability and will stay upright with no problems since the keels are beneath you.

This is because your center of gravity is higher, and sit-on kayaks are also generally wider.

However, if you lean slightly to one side when in the kayak, you are more likely to capsize a sit-on kayak than a sit-in.

The reason behind this is that a sit-in kayak has better secondary stability, wherein the weight distribution is lower.

Are Sit on Top Kayaks Safe?

Both kayak types are equally safe so long as they are used for what they are designed to be used for.

You should always wear a lifejacket when out in a kayak.

If you are not a confident swimmer, make sure you also stay close to your group.

Sit in or Sit on Kayak: Quick Reference Guide

So, should you choose a sit in or sit on kayak?

The best way to pick one is to think about where you will be doing most of your kayaking.

What is the weather like there, and what temperature will the water be?

You should also think about whether you will be going on longer or shorter adventures.

Sit-on kayaks, on the other hand, are better suited for shorter trips with warmer weather.

Here are the main points of difference once again in a quick-glance shortlist.

Which Is Better Sit In or Sit on Kayak?

The debate for sit in vs sit on kayak continues, but which one is better for you?

As you can see, deciding whether you need a sit in or sit on kayak is more complicated than it first looks.

However, if you will be doing most of your kayaking in cold waters, a sit-on kayak just isn’t viable.

Many people are scared of the confinement of sit-in kayaks, but you really shouldn’t be as they’re actually very hard to tip over.

Sit-on kayaks are ideal for colder water adventures, as well as longer-range excursions.

A bit more power and speed will be a massive help in getting you to your destination.

If you don’t plan on paddling too far and don’t mind getting wet, a sit-on kayak has many advantages.

This is especially true for beginners worried about capsizing or if you want to swim from your kayak.