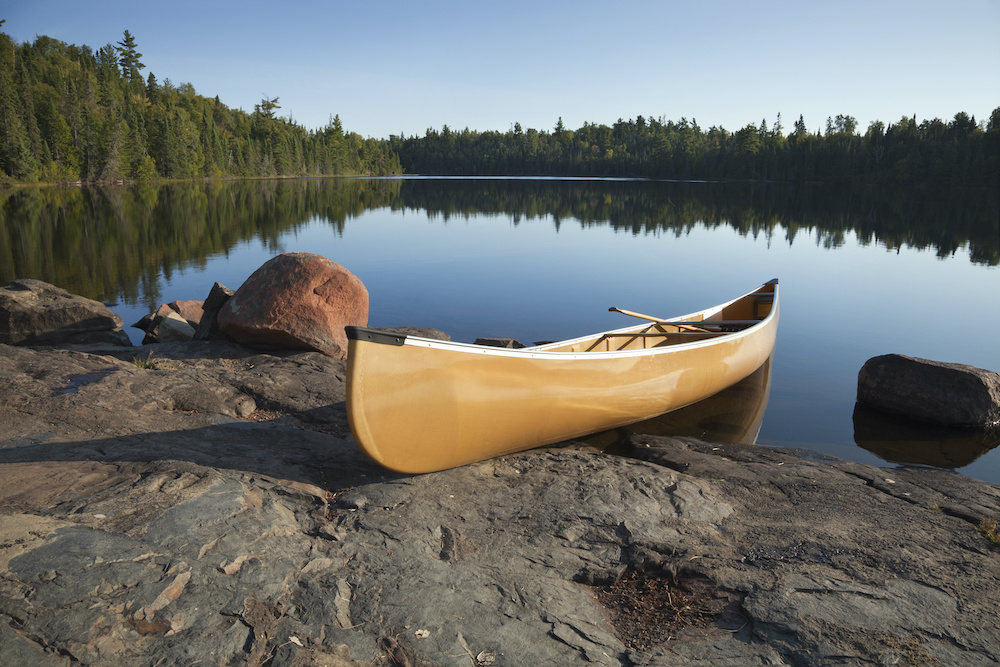 Difference Between Canoe and Kayak

Thinking of buying a small craft to get you out on the water?

Learn about the kayak and canoe differences to help you pick.

Very few people know the difference between canoe and kayak, which is understandable considering their many similarities.

Apart from the fact that they look alike, they are both waterborne vessels that rely on oar paddling power to propel you across the water.

We decided to study the kayak vs canoe debate more closely to see how they differ and decide if one vessel is superior to the other.

Difference Between Canoe and Kayak

So, what’s the difference between a kayak and a canoe?

As it turns out, despite their apparent similarities, there are actually many differences between the two.

Three of these differences are more visible: the paddles used in piloting the boats, the style of the deck, and the seating.

Other kayak and canoe differences are more subtle or may only become apparent with experience or knowledge of both.

These differences include the size and weight, maneuverability, stability, and origins of each boat type.

Let’s take a look at each point in more detail to see where each craft stands out.

One of the most notable differences between the canoe vs kayak is the oars or paddles used to propel the vessel forward.

The difference in the oars is one you can easily spot straight away, as they will either be single- or double-ended.

In a kayak setup, you have a double-ended oar. The blades are also usually curved.

You paddle with both ends of the oar on both sides of the boat, and your hands will remain evenly spaced on the paddle the entire time.

Whether you are paddling solo or in tandem, you will still be paddling with both ends of the oar.

When paddling in tandem, it is important to match each other’s rhythm.

Not only will this prevent the oars from crashing into one another, but it will also allow you to achieve higher speeds because the action is smoother.

When you’re canoeing, you also have just one oar, but this oar only has one (usually straight) blade on it and a T-shaped handle for you to grip.

This may change the way you paddle, depending on whether you are paddling solo or in tandem.

If you’re paddling solo, you will need to switch the side of the boat you are paddling on between each paddle stroke to maintain a straight course.

Otherwise, you will just be going around in circles.

Some people find it more difficult to paddle a canoe on their own as opposed to a kayak.

Also, you wouldn't be the first person in the world to accidentally drop your oar in the water.

If there are two of you paddling, you may find it easier to stick to paddling on just one side each.

Although, it may take a little practice to get into a rhythm with each other.

If one of you is paddling more strongly than the other, it will be more challenging to stay on course.

Therefore, the stronger paddler of the two of you will need to fix the difference to move in a straight line.

You can do this by having the stronger person paddle less effectively or perform fewer strokes than their weaker passenger.

The other option is to try helping the weaker one out by paddling on the other side (their side) from time to time.

However, it can be difficult to avoid zigzagging down the waterway when you compensate in this way.

The other visible difference is that the majority of canoes have open decks; kayaks usually have closed decks.

Sit-in kayaks have space inside the cockpit for you to slide your legs into.

This style of kayak is especially popular in colder climates.

In fact, in colder water and colder weather conditions, it is probably the only type of kayak you will want to try, as it keeps you warm and dry.

The opening you slide into can also be closed over by a skirt that attaches around the cockpit rim to completely seal it off.

So, if you see a closed deck, you know for sure it’s a kayak.

Still, an open deck doesn’t necessarily make it a canoe.

Many warmer weather kayaks (and sit-on kayaks) have open decks, so this shouldn’t be your only means for identification.

Along with their (almost always) open decks, canoes also have higher sides than kayaks, which means you are slightly more protected from water splashes.

However, the higher sides don’t just make it harder for water to get in.

You’ll also find it a lot harder to get into a canoe than a kayak, especially from the water. 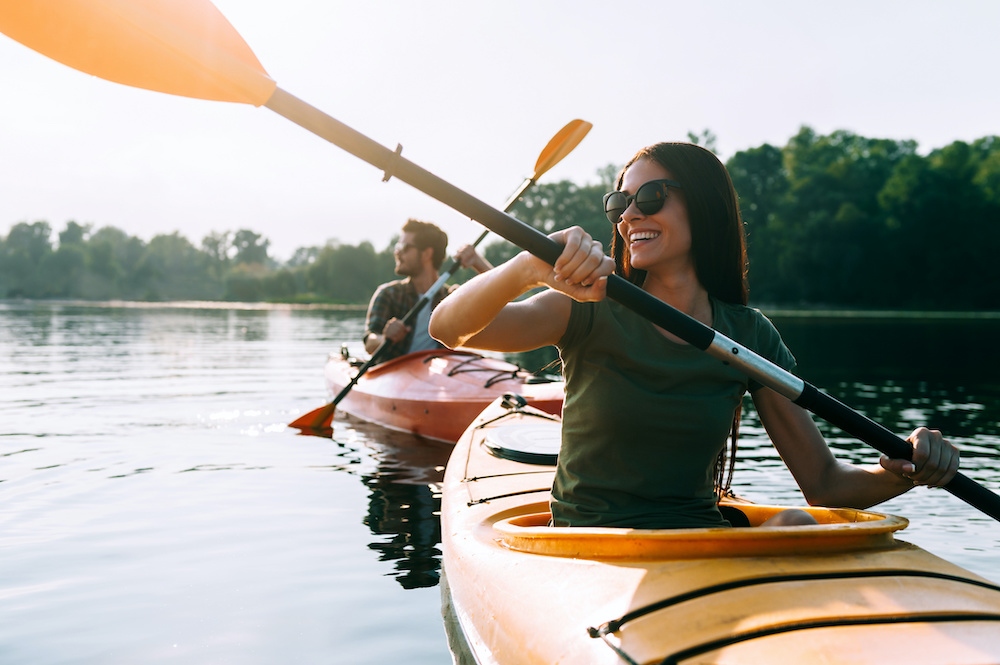 Another point of difference quickly spotted with a trained eye is the sitting position of the rider.

In a kayak, the rider or paddler will be sat down with their legs outstretched in front of them.

Kayaks aren’t really designed for any other option.

When it comes to canoes, quite often, the paddler will be kneeling or half-kneeling.

Some canoes have small benches in them, giving the rider a little more height than in a kayak.

Also, when solo paddling in a canoe, you may find it more comfortable to sit facing backward.

You will often see solo canoeists sitting on the bow seat, facing the stern and paddling backward.

Another point of difference is the overall size and weight of the vessels.

Kayaks are often smaller and much more lightweight than canoes.

For this reason, a kayak may be favored over a canoe.

It will usually be easier to store and carry to and from the water’s edge.

Canoes are often larger and heavier than kayaks, which makes them more challenging to transport.

A canoe may be preferred if you like to have more room inside your boat for you, your passengers, and your gear.

The canoe's larger size also lends other benefits aside from its roominess, such as better stability.

If you are not a strong swimmer or are scared of capsizing for any other reason (maybe the water is cold), stability is a big issue.

In a stability competition between a canoe vs kayak, the kayak will usually lose.

Because of their smaller size and usually slimmer design, they do have a slight tendency to tip over more easily.

A canoe is much more difficult to capsize.

They are generally larger and wider than kayaks, and their extra width makes them much more stable.

So, if you are worried about capsizing, a canoe may be the better option for you.

When you have had experience with both vessels, you’ll also notice a massive difference in the way you handle them.

Kayaks are usually faster and more maneuverable than canoes, mainly because they are generally smaller and lighter.

A shorter and lighter kayak will be easier to steer. Because it is typically slimmer, too, it will propel forward more efficiently.

If you have a sit-in kayak with a skirt covering the cockpit, it is also possible to perform an Eskimo roll.

In the event of a capsize, you can use the power of your body and your oar to right yourself again, all without even leaving the kayak.

A canoe, due to its larger size, has a larger surface area touching the water.

This creates more drag, and the weight also makes it slightly more difficult to turn.

Also, an Eskimo roll wouldn’t at all be possible in a canoe, so it’s a good thing that they are a lot less likely to capsize in the first place.

Finally, the boats themselves have different origins and histories.

Kayaks were developed by Inuit tribes in the Northwestern hemisphere, in areas we now know as Alaska, Canada, and Greenland.

They are thought to be just over 4,000 years old and were often used as hunting boats to catch seals due to their stealth.

The earliest kayaks were made out of hollowed trees or carved whale bones, with seal skin stretched over them to close over the top.

Scandinavian explorers then popularized the use of kayaks in Europe.

The Pesse canoe is a simple dugout canoe that was discovered in the Netherlands.

There is also evidence to show that similar style dugout canoes were used by native Australians and Amazonian tribes in prehistoric times.

Native Americans are also well-known for their canoes.

Europeans exploring North America back in the 14th to 16th centuries copied their style, and much of this area was “discovered” from a canoe.

It was in North America that they were developed much further.

Canoes and kayaks are classified in the same way, by using the first letter of their name, followed by the number of passengers that can be carried.

Knowing how they are classified can help you identify which is which when watching competitive sports or looking to buy one or the other.

If you see a K1 competing or for sale, you know it’s a one-person kayak.

If you see a C3, you know it’s a canoe that seats three.

Some places also list the style of the deck, making an open-deck kayak that seats two people an OK2.

Choosing Between a Kayak and a Canoe

Canoes are a fantastic choice for people who live on the water, as you don’t need to move them around so much onshore.

They are also great for recreational paddling and families who like the extra stability and space.

You can usually seat a lot more people in a canoe, so they are better for larger groups that want to paddle together.

Kayaks do tend to be slightly more popular, however, because they can be more easily transported to and from the water’s edge.

If you have a larger group, you’ll just need more kayaks.

Kayaks are also more popular in the rentals market, and many rivers and lakes will offer kayak rental for you to explore the water.

Many kayakers enjoy the extra speed and agility it offers.

So, what’s the difference between a kayak and a canoe?

It turns out there are quite a few differences between the two boats.

Still, despite the difference between canoe and kayak, both are used for competitive sports, fishing, travel, exercise, and fun.

Hopefully, you already have a better idea of which one will be right for you.